Our Brain Size Limits Our Number of Social Connections 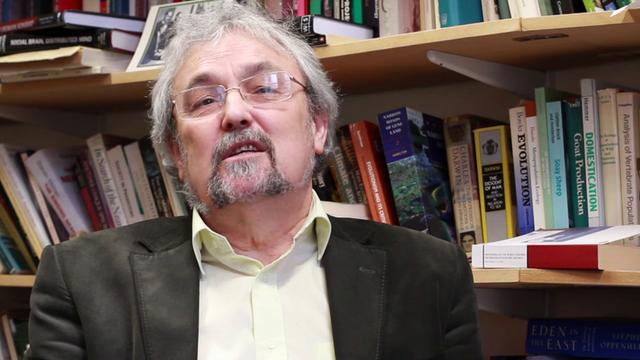 If you’ve ever read Malcolm Gladwell’s, The Tipping Point, then you probably have some faint recollection of the Dunbar Number. Gladwell used the case study of W.L. Gore and Associates to illustrate the theory. When one of their branches exceeds 150 people it splits. That’s commonly recognised as the Dunbar Number – 150.

Wikipedia’s overview of the Dunbar Number:

Dunbar’s number is a suggested cognitive limit to the number of people with whom one can maintain stable social relationships. These are relationships in which an individual knows who each person is, and how each person relates to every other person.

Dunbar discovered this number for human beings by studying primates, comparing the size of their brains with the size of their social environment. It seems there is a correlation between brain size and social group size: 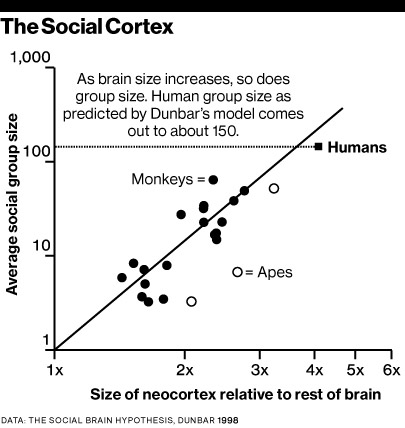 As a Bloomberg article on Dunbar points out:

As group size grows, a dizzying amount of data must be processed. A group of five has a total of 10 bilateral relationships between its members; a group of 20 has 190; a group of 50 has 1,225. Such a social life requires a big neocortex, the layers of neurons on the surface of the brain, where conscious thought takes place. In his 1992 paper, Dunbar plotted the size of the neocortex of each type of primate against the size of the group it lived in: The bigger the neocortex, the larger the group a primate could handle. At the same time, even the smartest primate—us—doesn’t have the processing power to live in an infinitely large group. To come up with a predicted human group size, Dunbar plugged our neocortex ratio into his graph and got 147.8.

This has all sorts of implications for us in today’s world of large social networks. It raises so many interesting questions around the role social networks play? I wonder if we’re fooling ourselves when we build our large networks, regarding the actual role they play and benefit they have to us in our everyday lives? Personally I’m very aware that while I have a digital social network that numbers in the thousands, I only engage regularly, and with some depth, with a very small percentage of the total size.

Dunbar spoke at a TEDxObserver event, Can the internet buy you more friends?