Fancy yourself a Disrupter? You’re going to have to go into battle 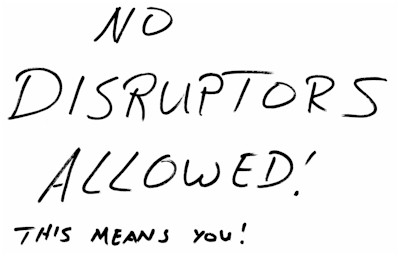 The world needs disrupters. In my opinion, at this moment, lots and lots of them.

I spent last night at ‘The School of Magic’ launch, which is PPC Cement’s Leadership Academy. My table at dinner included a collection of Southern Africans passionately discussing broader macro issues faced by the region and what needs to be done about it.

Heavy topic right? Makes you want to vacate the area?

A good point was made early on that got me hooked in, that the so-called protestors were not coming to the party with viable solutions! Sure there are massive obstacles, hurdles and things fundamentally sick in the countries represented at the table, but where are the viable solutions that will attract the attention of all parties and get them gathered around a table?

This is not a new concept. It’s the innovators biggest struggle. How to convince an audience, or a market to leave what they currently have, the known and the comfortable, and shift to a new product, a new service and a new way of doing things? It’s one thing to develop something fresh, and even useful, it’s another to get enough buy-in to have a viable business. And without that, all you have is a clever thought and not an innovation.

Last week Doo B Doo posted a piece from FastCompany that’s part of their new CoCreate emphasis. Over the weekend I came across a piece on the FastCompany website showcasing stories of disrupters and the hard work they had to put in, to succeed (and fail). It’s a little light in areas, but it served as a great reminder to me that the work of disruption is not for the faint-hearted. It’s not for the weaklings and the sissies. You have to put on your big girl/boy underpants if you want to be a disrupter.

ABC fired its programming chief for green-lighting Lost. Howard Schultz shrugged off the Starbucks worker who first pitched a blended-coffee drink. For most businesspeople, realising any creative vision–while addressing concerns about scale, tradition, and profitability–is a Herculean task. Here, 10 bold thinkers tell us how they pulled it off (or tried to), and the lessons they learned along the way. (click here to read more)