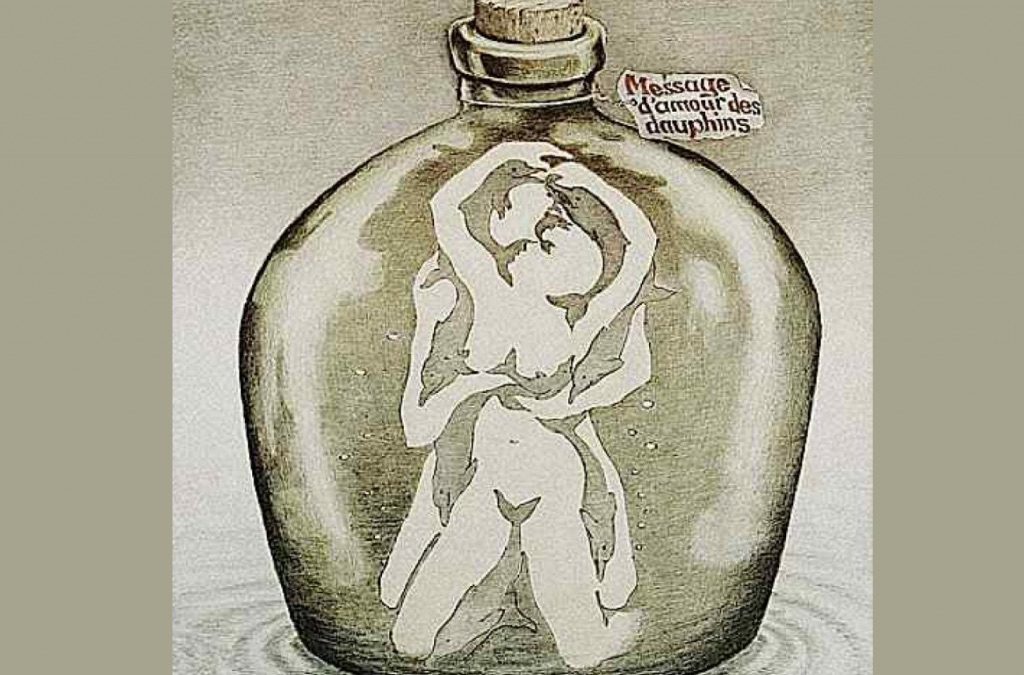 When you looked at the bottle (the cover image for this post) what did you see?

I asked some friends with younger children to do this exercise with their kids. The results, thanks to those who played illustrated this exactly as it’s supposed to be. In my small sample 7 seems to be the cut off age. Over 8 years old and you see the bodies. Younger and it’s dolphins.

The bottle image is an optical illusion that illustrates that we draw off of our history when we look at things. Our brain’s first response is to try and match what we’re seeing with what we’ve seen before. It’s an incredible response of efficiency that falls into the category ‘Survival Mechanism’. Less resource is required to match an image than to start from scratch and work out what we’re looking at. The human body and brain, are at the same time, both incredible and frustrating.

This exercise also serves as a sobering reminder that sometimes what we see isn’t actually so. It’s why new people in a meeting ask different questions. Their brains aren’t trapped by looking at the same things in the same way meeting after meeting. They see dolphins were we see bodies (or the other way around if you want to be the dolphin spotter).

It’s why so many of my posts are about play and why we started the Creative Play Society. Play is also an evolutionary survival mechanism that forces us to continually engage our imaginations. Play exercises our creativity muscle. It’s through the practice of play that we ensure we don’t get stuck in the same old paradigms that keep us locked in spirals of little to no forward movement. It’s so very sad that we think that play belongs exclusively in the domain of children.

It’s my very simplistic reasoning for Brexit and Trump and environmental destruction and Zuma and the horrid handling of the global economic meltdown, and other things. Collectively we don’t believe we have any better answers. We got so very stuck, and our inability to creatively find a new way forward, in many instances, has us reaching backwards into our collective history/memory hoping that solutions to old problems might magically become solutions to the new ones we’re facing. There’s nothing creative about that. It’s desperate not creative.

My Solution to the Chaos

My solution to the current chaos is not to knuckle down and get more serious at the work of fixing things. It’s to play more. It’s to re-engage our imagination in the ways we did many many years ago. It’s to re-awaken our creative muscles. It’s to trust that as a human species we’ve made it this far because we once played, and through that play we kept our creative abilities to adapt, survive and thrive alive. The abandonment of play is a relatively new phenomena in the history of human beings. It’s definitely not too late to acknowledge this error and do things differently.