Words, Colours and the Stroop Effect 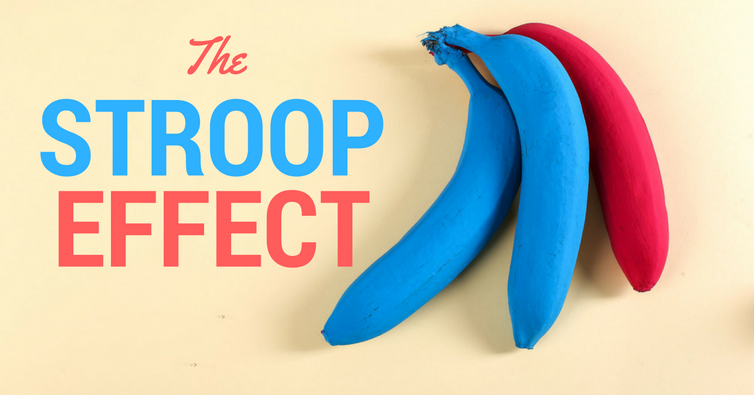 Have you heard of the Stroop Effect? Before I explain what it is and why our brains get overloaded and in a muddle, try this simple exercise: 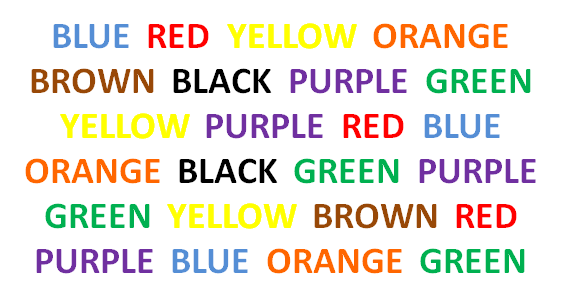 It may be simple, but it’s not easy. It’s called the Stroop Effect and according to Wikipedia, it’s named after John Ridley Stroop, who first published the effect in English in 1935 (it had been published originally in Germany in 1929).

I went on a journey of discovery to find out why our brains struggle to do this exercise? There are a few theories out there describing the effect. Here is the most common one:

The brain can’t help but read. As habitual readers, we encounter and comprehend words on such a persistent basis that the reading occurs almost effortlessly, whereas declaration of a colour requires more cognitive effort. When there is a conflict between these two sources of information, our cognitive load is increased, and our brains have to work harder to resolve the required difference. Performing these tasks (preventing reading, processing word colour, and resolving information conflict) ultimately slows down our responses, and makes the task take longer.

If you do the exercise again with the image below (assuming you don’t speak German) you’ll find that you get through the words far quicker and without your brain going into high speed processing mode (I could feel mine working overtime in the first exercise). 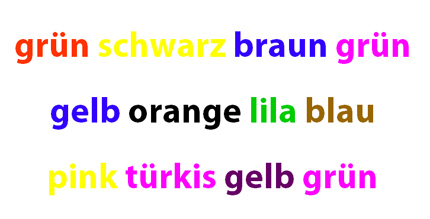 It’s easier in the second exercise because the conflict between identifying words and processing colour is lessened. Except when I got to ‘Pink’, where the conflict increased for me 🙂

What seemed like a next obvious question to me, was whether practicing this test might have any impact on my brain? It is, after-all, used in many ‘Train Your Brain’ programmes. Would I get less muddled and would my brain process any faster?

I created one (download it below if you’d like to test it for yourself). I printed it out and stuck it on my bathroom mirror. I’m going run through it before or after brushing my teeth (happens twice a day), and see if I notice a difference after 2 weeks?

Barrie is a business conference speaker, specialising in Disruption, Change, Creativity and Play