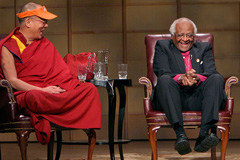 It does feel disrespectful referring to Archbishop Desmond Tutu and the Dalai Lama as ‘two old men’, but it helps make my point : )

We so often hear cliches referring to the ability of just one person to change the world. Well here are two men in their late 70’s, who’ve manage to get the planet talking. From Beijing to Los Angeles and from Glasgow to Cape Town. Whether you think that there’s been any intentionality to what they’ve pulled off or not, it’s an impressive outcome they’ve achieved.

In my opinion this was never about a Birthday party. I’m fairly certain that they must have known when they started out on securing a visa that there was a fairly good chance that the Dalai Lama wouldn’t get a thumbs up from the South African powers that be. In my fantasy world, which is alive and well, I like to imagine them plotting this from the beginning. Plan A was not getting the visa. Plan B was the two of them being at The Archbishop’s party : )

Look at what they’ve started? Everything that the world is talking about is exactly what the two of them stand for. They’ve used something as simple as a birthday party as the vehicle to get the conversation going.

They’ve united the people of South Africa and the world in a conversation about, morals, ethics, human rights, what it means to feel welcome and be welcomed, courage, taking on the powerful, exposing the corrupt, the right to information. The list is as long as it is impressive.

These two ‘old men’ have once again shown us why they’re global heroes. They’ve shown us that when wisdom is on your side, you choose your moments carefully, and you’re patient, that it’s not very difficult to expose injustice, the abuse of power, and the pursuit of money over human rights. It’s a lesson I wish some younger leaders would learn. Changing the world doesn’t require angry and destructive rhetoric. It doesn’t need an aggressive and demonstrative show of force.

Happy Birthday Archbishop. Thank you once again for showing us how it’s done : )