A Disruptive Experiential Campaign – Park Hurts. And in Jozi it’s starting to all over the place 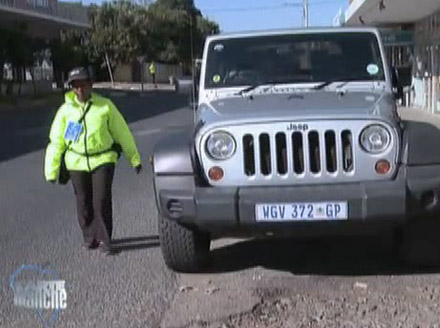 Unless you were in Parkhurst, Johannesburg on Friday and Saturday last week, you’d be forgiven for missing the Tracker ‘Park Hurts’, very clever disruptive experiential campaign, they ran in the well known buzzing 4th Avenue. It’s a clever response, executed on Tracker’s behalf by House of Brave. From Tracker’s blog:

Tracker is responding to the public outcry over the City of Johannesburg’s unpopular move to install parking meters in popular suburbs with its innovative on-site “Park Hurts” campaign kicking off in Parkhurst. 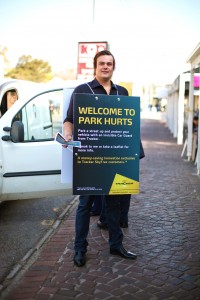 Today and Saturday 19 May, 4th Street in Parkhurst will be witness to Tracker taking back tomorrow with people wearing sandwich boards and handing out flyers stating: “Welcome to Park Hurts. Park a street up and protect your vehicle with an invisible Car Guard from Tracker.”

The campaign is to promote Tracker SMS Car Guard as a money-saving and peace-of-mind initiative, allowing Tracker SkyTrax customers to proactively protect what’s theirs without having to fork out R8 an hour for line of sight parking. Patrons of Parkhurst’s shops and restaurants will be able to park wherever they choose, knowing Tracker is keeping an eye on their vehicle, even when they can’t.

I happened to be in Parkhurst on Friday evening having a drink and watched the sandwich board wearing Park Hurts project team doing their thing in the streets. Handing out leaflets from Tracker and greeting some parkers paying over their money to the Ace Parking Attendants with a loud “Park Hurts”, accompanied with a knowing smile.

For those of you who read my ramblings from time to time, you’ll know I love clever people, and this response to a public outcry over the parking was well timed and very very clever. Hats off to Tracker and House of Brave for a well executed and entertaining response to what many see as a City Council taking advantage of their citizens without offering any reciprocal service for the ridiculous R8 per hour charge they’re currently levying.